Paracelsis has preclinical (nonclinical) research and development (R&D) expertise and capabilities to support the Pharmaceutical Industry and offers tailored laboratory studies to address its customer’s R&D needs. Some of the work that it undertakes involves the use of animals. Paracelsis takes this work very seriously and such work is conducted in strict obeyance with its principles.

Research species and models:
Paracelsis is capable of conducting non-GLP studies in a range of small and large animal models (mice, rats, guinea pigs, rabbits, sheep, goats and pigs). Use of additional species at its typical Test Facilities may be possible; alternatively, Paracelsis can help place studies using non-routine species or where studies need to be conducted to GLP at external facilities and can monitor studies on behalf of its customer. In terms of animal models, many of the studies that Paracelsis conducts utilise simple dosing and sampling procedures similar to those typically used in early phase human clinical trials. The use of more complex models is feasible so please enquire.

Drug candidates and routes of administration:
We are highly experienced with conventional (small molecule) drugs, peptide and protein drugs, and vaccine antigens and a wide range of parenteral and non-parenteral (transmucosal) administration routes. We have extensive experience developing nasal drug products and intranasal drug delivery systems using conventional as well as novel excipients such as chitosan (a mucoadhesive) and LM Pectin (an in-situ gelling system).

The term ‘pharmacokinetics’ describes what the body does to a drug and refers to the time course of the drug in the body in terms of its absorption, distribution, metabolism and excretion (ADME). ‘Pharmacodynamics’ describe what a drug does to the body and the onset, duration, and intensity of a drug’s effect(s) in the body will be determined by its pharmacokinetics. Paracelsis is highly experienced in conducting PK/PD investigations in a variety of animal models including large animal models which tend to be more predictive of PK in humans. Routes include nasal, lung (via nebuliser), sublingual, buccal, oral, vaginal, rectal and parenteral injection. When investigating a particular (non-vascular) route of administration, the drug will usually also be given by intravenous injection to allow absolute bioavailability to be calculated.

The example below shows the PK profiles of four different nasal formulations (containing different pharmaceutical excipients) in sheep compared to intravenous injection. The study was conducted as a randomised crossover (n=6). 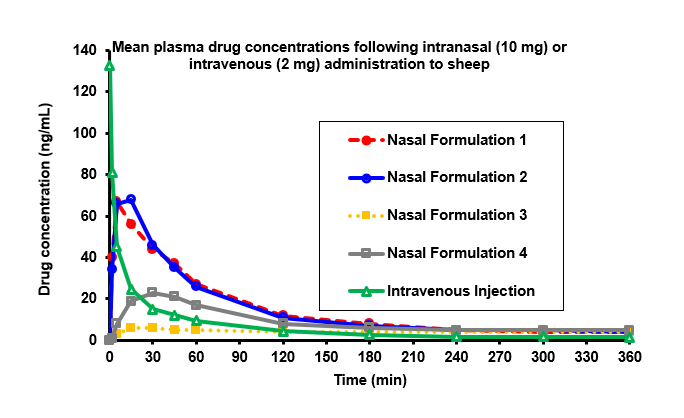 Unlike most conventional drugs, antigens from vaccines are expected to be absorbed and distributed in lymphoid tissue/lymphatic system where an immune response is started. Regulatory approval of vaccines does not generally require experimental PK (ADME) and PD studies per se although study of immunogenicity, which determines the immune response to a vaccine antigen, is essentially a study of PD. Paracelsis has considerable experience in the design and conduct of immunogenicity laboratory studies in animals to assess safety, immunogenicity and, in cases where an appropriate challenge model exists, efficacy. We have worked directly with a variety of antigens up to Biosafety level (BSL) 2 at our facilities and in cases where higher containment is required (i.e. BSL 3/4), we can arrange for the work to be outsourced to suitable laboratories.

Paracelsis is experienced in conducting non-invasive imaging studies in animals. Most experience has been gained in small and large animal models using the technique gamma scintigraphy. Other types of imaging, such as magnetic resonance imaging (MRI), may be feasible in small animals at its Test Facilities. Gamma scintigraphy generally involves tracing a suitable radiolabel over time using a gamma camera. Thus, the technique can be used to investigate the disposition of radiolabeled drugs or markers following administration to animals.

The image below is of a rabbit which was taken using a gamma camera following intranasal administration of a radiolabelled formulation. The image shows deposition in the nasal cavity and some clearance to the stomach (relative to position of anatomical markers). 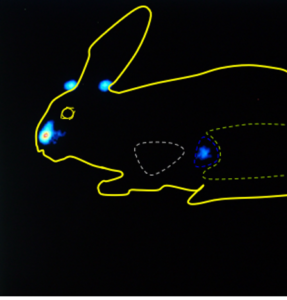 As part of a PK/PD, immunogenicity or imaging study, health monitoring of the animals is conducted based on cage-side and clinical observations. Additional observations are routinely made to assess the tolerability of an administered dose. For example, after nasal administration to sheep, we count episodes of sneezing/snorting and monitor for nasal discharge to evaluate treatment differences (comparison usually made to animals dosed by intravenous injection). At the end of the study we can perform necropsy and undertake a macroscopic and microscopic (histopathology) examination.

To obtain a better understanding of local tolerability/toxicity of investigational products, we could potentially undertake repeat-dose studies including investigation of haematology and clinical biochemistry and a full or partial histopathological examination.

A comprehensive literature search is pre-requisite to any hazard and health risk assessment undertaken on a drug or other chemical (e.g. impurity or extractable/leachable). However, gaps in physicochemical and/or toxicological data are often encountered and this can be the case, for example, even for well-established drugs that have been used in clinical practice for decades. In such circumstances, lab studies may not be pertinent (e.g. for a well-established drug during setting of health-based exposure limits) and in any case is undesirable in terms of resource, costs and timeline. Tests that require use of animals also raise ethical considerations and are banned for cosmetics marketed in Europe. Where feasible, we utilize computer-based methods based on chemical grouping, read-across approach, or (Quantitative) Structure-Activity Relationships ((Q)SARS) to plug data gaps. The hypothesis for this approaches being that chemical structure and reactivity is related to biological activity (and toxicity) such that the biological activity of an untested compound can be predicted from that of similar compounds.

Paracelsis routinely applies (Q)SAR models using open-source OECD QSAR Toolbox, Toxtree and Vega programmes to help fill toxicological data gaps. Where such models prove inadequate, it may instigate additional analyses using commercial (Q)SAR and expert software programmes such as those developed by Lhasa, Leadscope and Multicase. (Q)SAR assessments can be especially useful to evaluate the genotoxic potential of impurities and contaminants which pose a particular challenge to risk assessment. Indeed, the International Conference on Harmonization (ICH) M7 guideline (Assessment and control of DNA reactive (mutagenic) impurities in pharmaceuticals to limit potential carcinogenic risk), which provides a framework for assessing and controlling DNA reactive impurities in a pharmaceutical product, allows the use of in silico approaches, including (Q)SARs.